Space Center Houston seeks gifts that help advance our mission to inspire all generations through the wonders of space exploration.

Donations bolster our efforts to develop and enhance authentic science, technology, engineering and mathematics (STEM) experiences, helping us to inspire a new generation of explorers, engineers, and problem solvers by making space and science learning more accessible for all.

Join Space Center Houston’s community of contributors and help us continue growing the number of learners who enter the STEM pathway!

Every gift is tax deductible in accordance with IRS regulations. 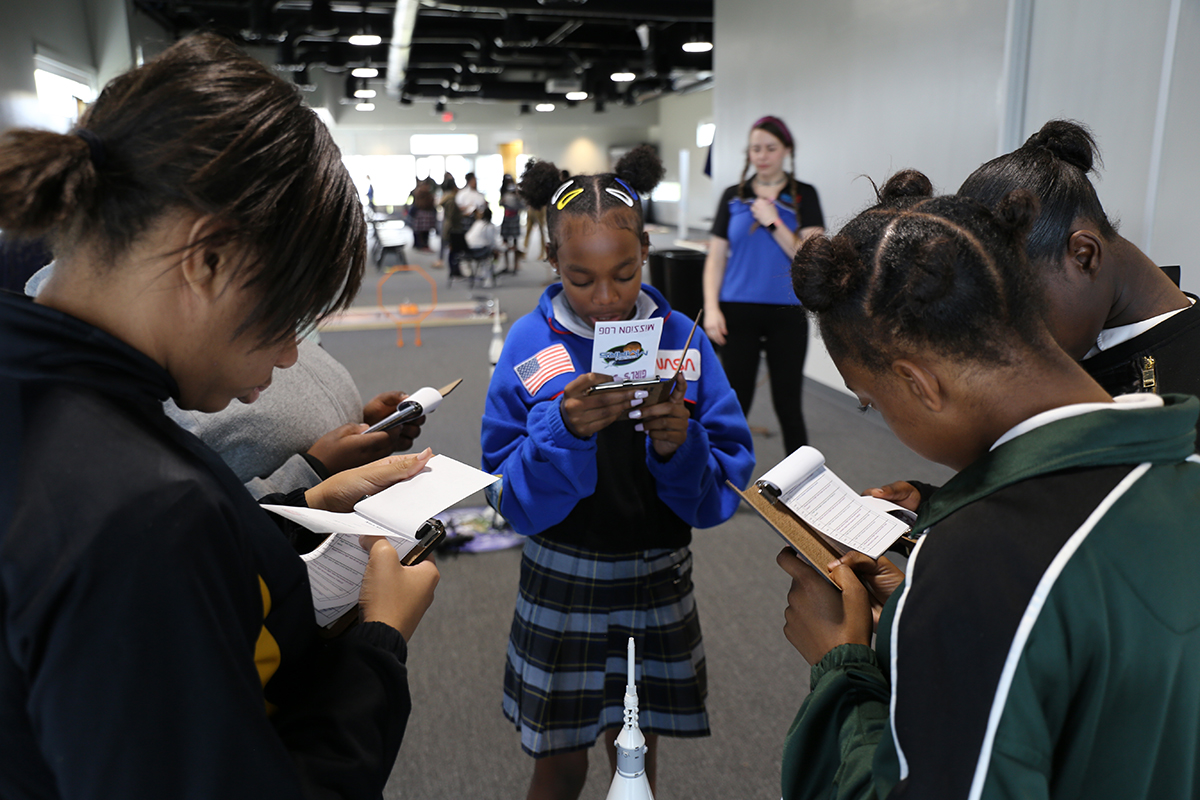 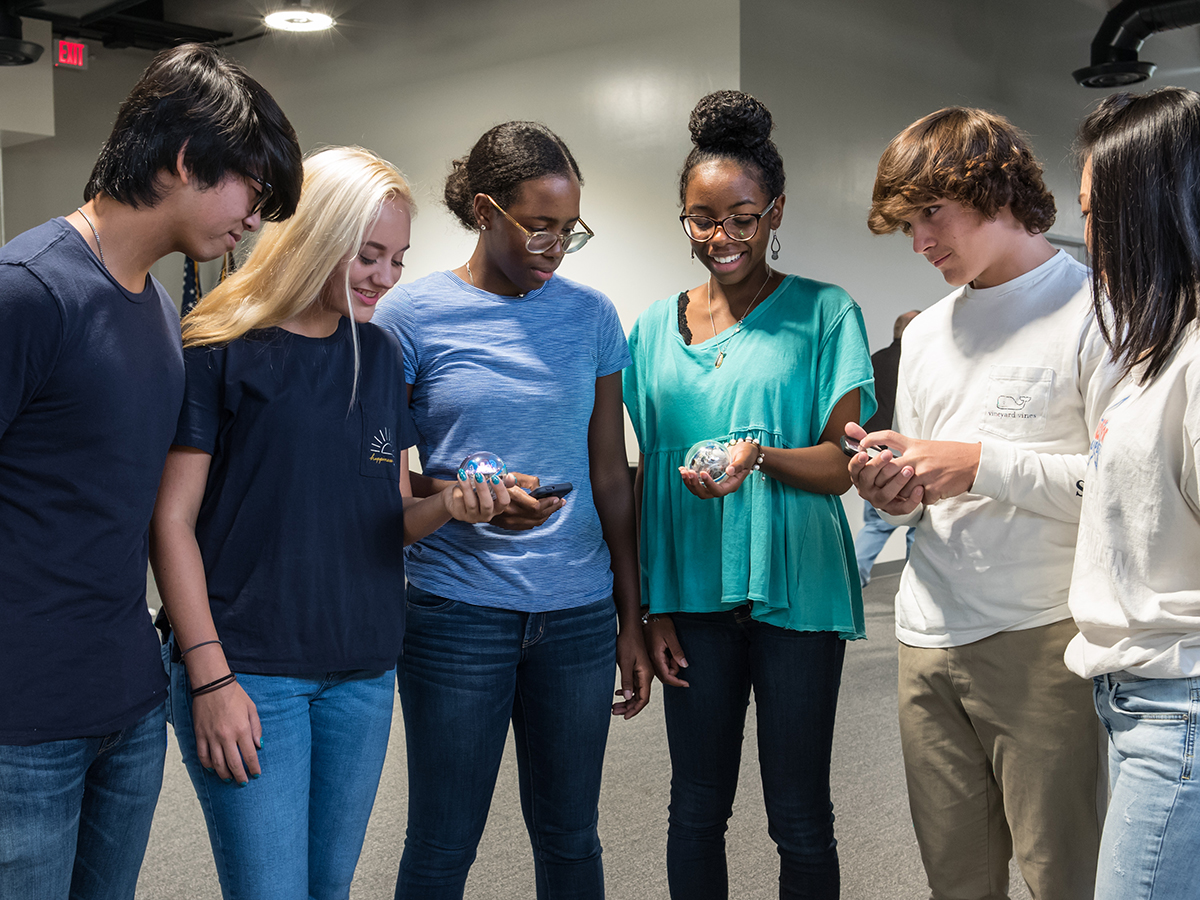 High school students examine one type of robot they will work with in our Stars & STEM program.
Help us create space for everyone and inspire the next generation of engineers and scientists!

Most of a person’s science learning takes place outside of the five percent of their lives spent in a traditional classroom setting. Informal learning experiences like the programs, exhibits, and activities available at Space Center Houston are all ideal ways for learners of all ages to engage in meaningful learning experiences.

Informal learning environments are unique. They give students the ability to ask questions, explore solutions and create next steps on their own. This practice helps create excitement, drives curiosity and contributes to a person’s knowledge and interest in STEM both now and in the future.

Experiences like those available in our youth STEM education programs can spark creative and innovative thinking and heighten students’ motivation to learn.

Donations that support access for underserved youth to Space Center Houston STEM education programs help us extend meaningful experiences to low-income students who otherwise would not have the opportunity to participate in our programming.

The unprecedented coronavirus (COVID-19) global pandemic forced a paradigm shift for museums and science centers around the nation. To continue engaging our community in space and science learning, Space Center Houston increased its use of digital learning platforms to meet the increased demand for access to effective and engaging digital STEM learning resources.

Through the Digital Education Resources Initiative, Space Center Houston’s education specialists use our largely unrestricted access to NASA learning resources to illustrate STEM concepts using the science behind space exploration. They also adapt, interpret and align these resources with state and national science learning standards, which enables teachers and home school instructors to seamlessly integrate engaging content into their curricula.

The Digital Education Resources Initiative’s impact is twofold: it helps strengthen Space Center Houston’s partnerships with regional schools and community organizations by supporting and providing educators with useful content, and it helps expand our efforts to serve national and international audiences.

The prospect of larger audiences, greater interactivity and community building relate directly to our long-term strategic goals and mission of sharing broadly the wonders of space exploration. 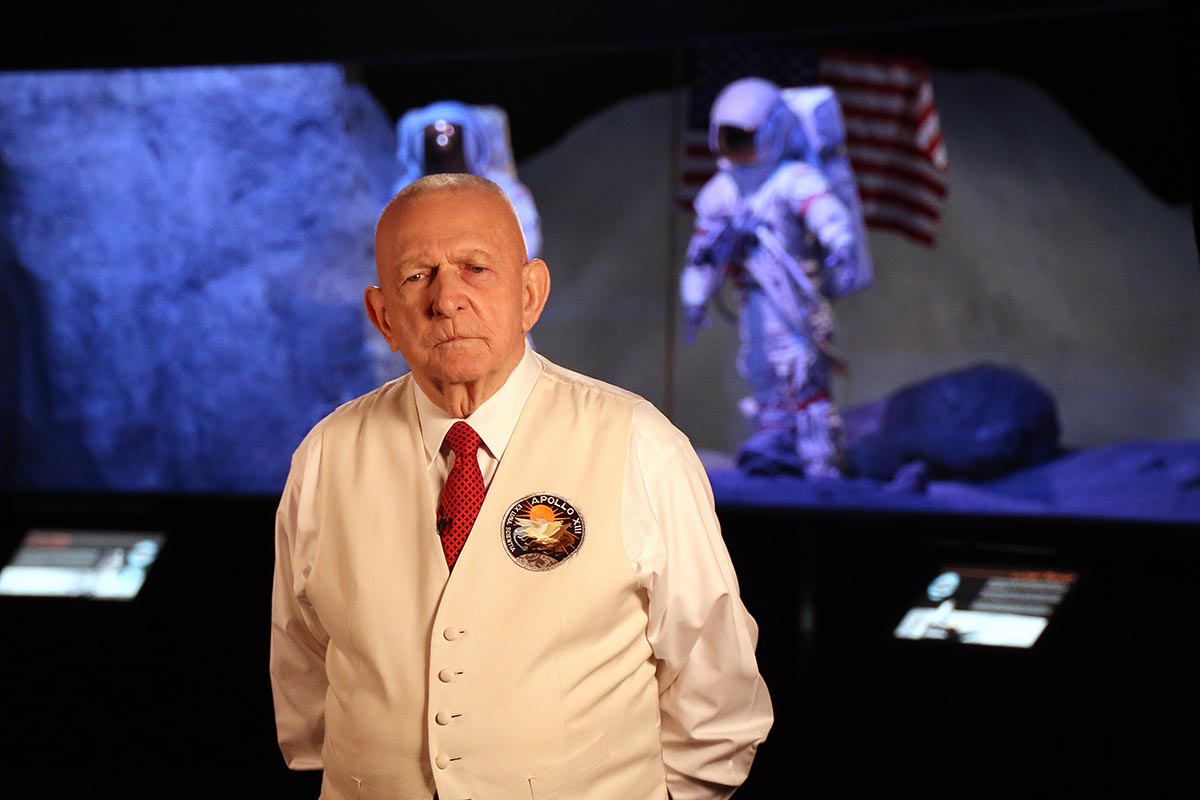 Apollo-era Flight Director Gene Kranz wears his iconic Apollo 13 vest in Starship Gallery.
A community of supporters from around the world came together through a highly successful crowdfunding campaign to join Space Center Houston and the City of Webster’s efforts to restore the Apollo Mission Control Center at NASA Johnson Space Center and preserve the legacy of the Apollo Program.

By supporting the Gene Kranz Scholarship Fund, we can work together to begin shaping tomorrow’s leaders in human space exploration and other important STEM fields.

Unrestricted gifts strengthen Space Center Houston’s core mission of education, providing us with resources for hands-on learning activities that are specifically designed to encourage learners of all ages to join the STEM pathway.

From remarkable exhibits like the SpaceX Falcon 9 booster, to the historic Apollo 17 command module, Saturn V rocket, and the world’s largest collection of lunar samples on public display, Space Center Houston is thrilled to open the doors of inquiry and discovery for learners of all ages through the wonders and excitement of space and science learning.

Join Space Center Houston’s mission and help us create space for everyone!

Your gift — in any amount — has an immediate impact on our mission to inspire all generations through the wonders of space exploration.

You can make a tax-deductible gift in the following ways:

Online (by credit or debit card)
By clicking on the “Donate Now” button, you can make a debit or credit card donation through our secure website to the Manned Space Flight Education Foundation. We accept Visa, Mastercard, Discover and American Express.
By telephone
Call +1 281-244-2126 to make your credit/debit card gift over the telephone.
By mail
Mail your check to the Manned Space Flight Education Foundation, Development Department, 1601 NASA Parkway, Houston, TX 77058. You may make an unrestricted gift to support our mission or designate your gift for education programs or capital projects such as the Restoration of Historic Mission Control. Simply indicate your designation on the memo line of your check or with accompanying correspondence.
Gifts of stock
A gift of appreciated securities can be a financially beneficial donation. Donors may receive a tax deduction for the fair market value of the stock on the date of the transfer and avoid capital gains on its appreciated value.

If you are considering making a gift of securities, please contact us at +1 281-244-2126 prior to making the donation so we can provide you or your broker with the banking information for the transfer. We will record the specific date of your transfer to provide you with the appropriate tax documentation.

Matching gifts
Many companies offer a matching gift program as a benefit to their employees. You can double or even triple your impact when you take advantage of a matching gift benefit. If you are not sure, please contact your company’s human resources or benefits office to inquire if your company offers matching gifts.
Legacy or planned gifts
Planned giving is a way to make a gift while maximizing your investment goals. Some gift vehicles create an income stream for you! All planned gifts should be made in consultation with your financial advisor. The simplest form of planned gift is a bequest in your will. Suggested bequest language to share with your advisor is as follows: “After fulfilling all other provisions, I give, devise, and bequeath ____ percent of the remainder of my estate or $ ____ [specific amount] to the Manned Space Flight Education Foundation. (Tax ID 76-0217152), a charitable organization incorporated under the laws of Texas, located at 1601 NASA Parkway, Houston, TX 77058.”

Our donors have helped open the world of space exploration to more than 22 million visitors since Space Center Houston opened in 1992. We are grateful to those who make possible exciting space and science learning opportunities, programs, and exhibits. Our donors are our greatest champions for inspiring the next generation of explorers. Your contributions give us the encouragement and the means to lift young minds to new heights.

Donors who contribute $50 or more (based on total contributions per calendar year) are listed in Space Center Houston’s annual donor honor roll, which is published on our website during the first quarter of the new year (following the end of the previous calendar year).