In the middle of the Cold War, one mission not only put the U.S. space program back in front of Russia. It also boosted NASA to the Moon. 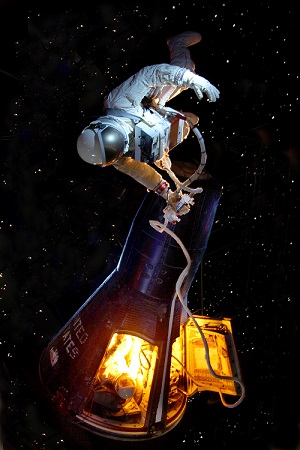 On Aug. 21, 1965, the third crewed Gemini flight went up with a pair of astronauts nestled in its belly. Charles “Pete” Conrad and Gordon Cooper were launched into space on a mission that lasted just shy of eight days, setting a new record for longest human space flight that was three days longer than the previous Soviet Union record. Conrad and Cooper circled the Earth 120 times on that trip.

Designed to take two astronauts at a time, the Gemini Program was aptly named after the constellation, whose name in Greek means “Twins.” Gemini V was significant because of its duration.

To get to the Moon would take eight days, so this groundbreaking mission helped NASA engineers determine how well fuel cells would hold up to that journey.

Conrad dubbed the mission “eight days in a garbage can,” thanks to the cramped quarters of the Gemini cabin and later wished for a book to pass the time. Gemini capsules look like enlarged versions of the Mercury capsules.

Although the Gemini capsules weighed twice as much as their Mercury counterparts, they offered only slightly more cabin space.

Gemini V also became the first spaceflight with a crew patch after Conrad and Cooper designed their own, sparking a tradition that continues to this day.

On loan from the Smithsonian National Air and Space Museum, the actual flown Gemini V spacecraft is on display here at Houston’s first Smithsonian Affiliate.