Apollo 13 was to be the third lunar landing, but the mission was aborted after the Service Module ruptured due to a malfunction in an oxygen tank. Still, Apollo 13 is considered a "successful failure" because of the experience gained in rescuing the crew. 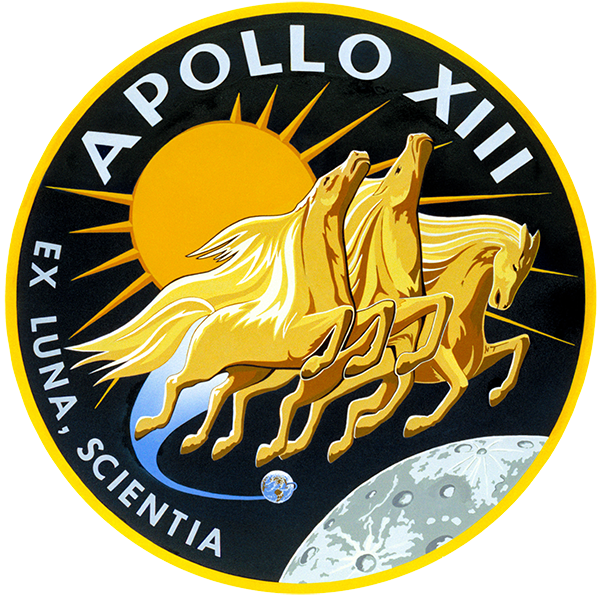 See historic Apollo 13 artifacts in person in our new exhibit “Apollo 13: Failure is not an option” now on display. 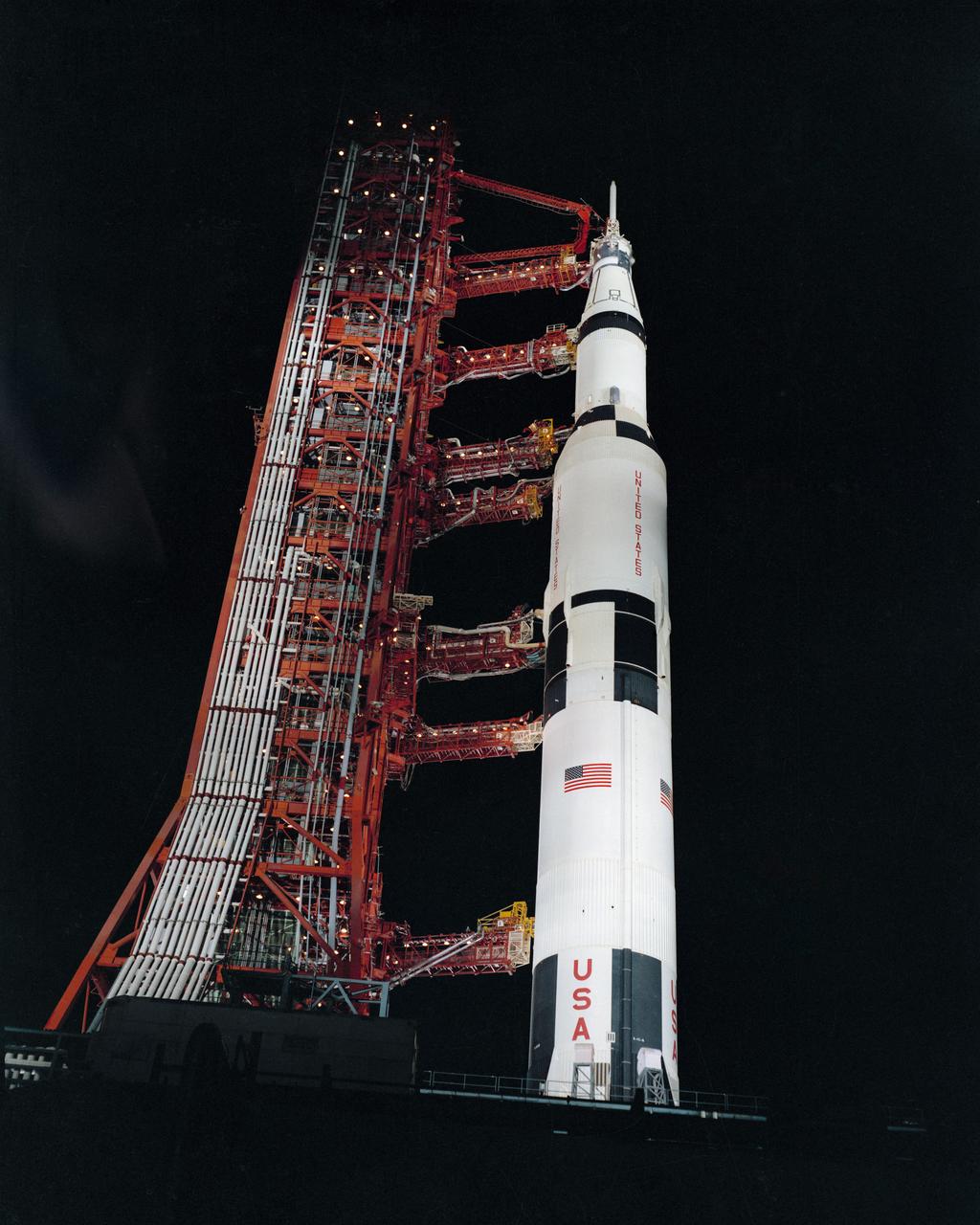 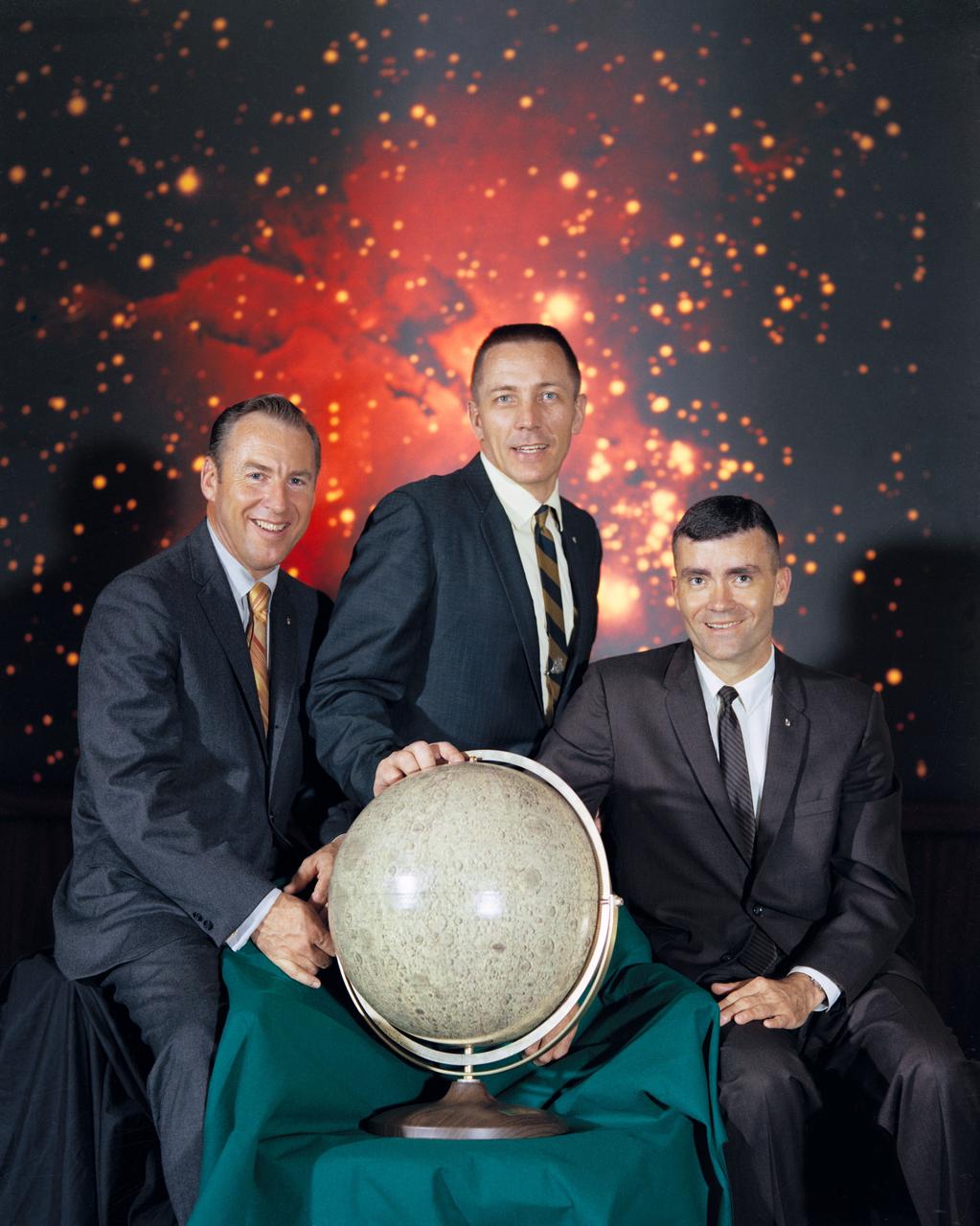 OFF TO A GOOD START

The trip to the Moon from Earth took about three days. The Apollo 13 flight was looking like the smoothest flight of the program. Two days into the mission, Joe Kerwin, the capsule communicator (CAPCOM) on duty, indicated the spacecraft was in good shape and even joked about boredom.

Fifty-five hours and 46 minutes after the mission started, the Apollo 13 crew finished a TV broadcast, and Commander Jim Lovell wished viewers a good evening. A few minutes later, mission control asked the crew to activate a routine stir in the oxygen tanks in the Service Module (SM). Houston, we've had a problem ...

Commander Jim Lovell reported gas venting from the spacecraft. One oxygen tank appeared to be completely empty, and the second tank was quickly draining.

The fuel cells generated the Command and Service Module's electricity by combining oxygen and hydrogen. When the oxygen tank ran dry, the remaining fuel cell shut down, leaving only the Command Module’s (CM) limited-duration battery power. The crew was about 200,000 miles from Earth, and the CM’s normal supply of electricity and water was lost. The mission's goal became simply to get the astronauts back to Earth safely.

About an hour after the explosion, it became clear CM Odyssey needed to be shut down, saving the limited power it had left for reentry into Earth’s atmosphere. There was no procedure to shut down the CM, so ground controllers in Houston wrote completely new procedures and tested them in the simulator before sending the instructions to the crew in space. 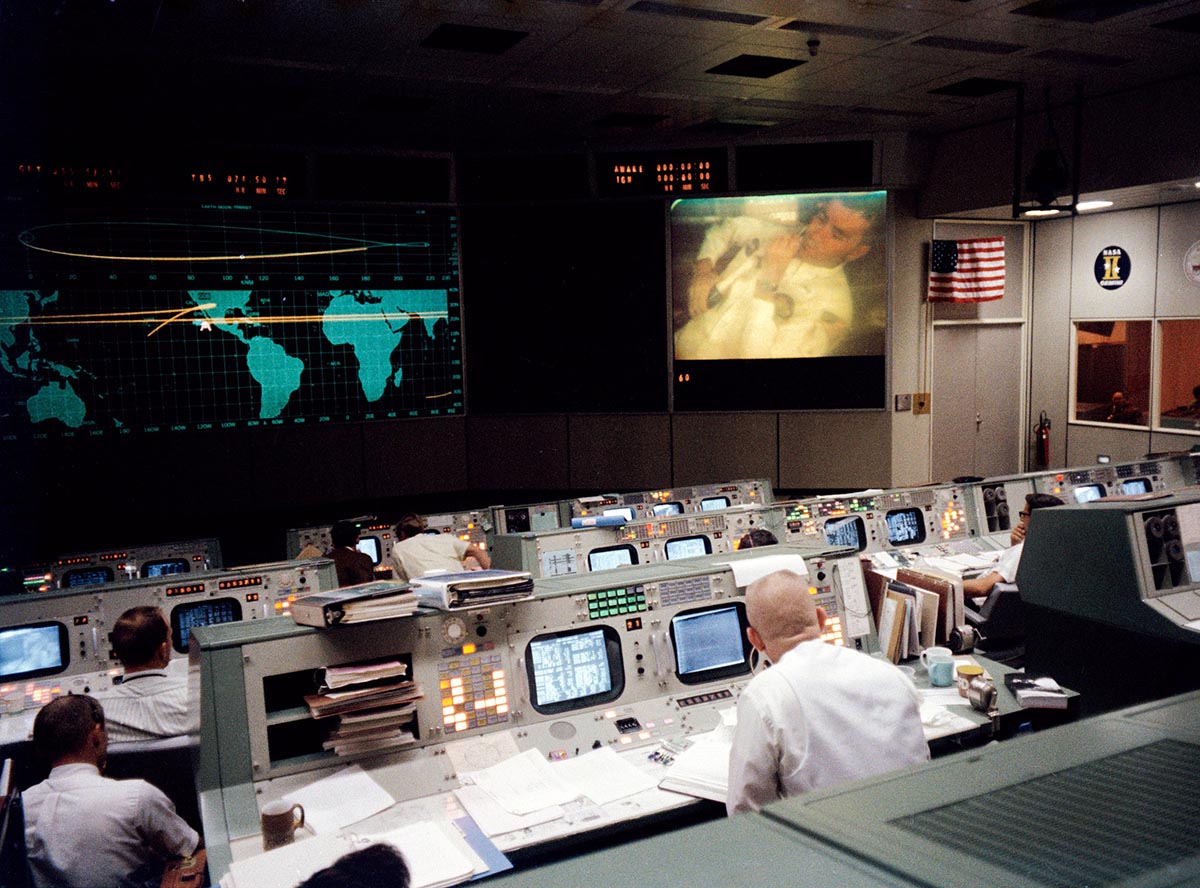 Once the Command Module was shut down, the Apollo 13 crew moved into the Lunar Module (LM). The crew took inventory of the consumables they needed to get back to Earth. The LM had a 45-hour lifetime that needed to be stretched to 90 hours.

The LM’s oxygen and water for cooling the spacecraft systems would be sufficient. Power would have to be conserved. All noncritical systems were turned off and energy consumption was reduced to 20 percent.

The crew reduced their consumption of drinking water to six ounces per day. The astronauts became dehydrated throughout the flight. Lovell lost 14 pounds, and the crew lost a combined total of 31.5 pounds, nearly 50 percent more than other crews.

The LM, designed to support two astronauts for two days, was now being used by three crew for about four days. After a day and a half in LM Aquarius, carbon dioxide (CO2) from the astronauts’ exhalation had reached a dangerous level.

Apollo CM and LM systems used lithium hydroxide filters to absorb CO2. Filters for the LM were stored outside the LM, out of reach of Apollo 13 astronauts. There were plenty square filters from the crippled CM, but they did not fit the LM’s round filter system. Mission control devised an adapter using only materials the crew had available on the spacecraft, tested it, and radioed the instructions to the crew. Mission Control's Apollo 13 CO2 Scrubber is on display in Starship Gallery. 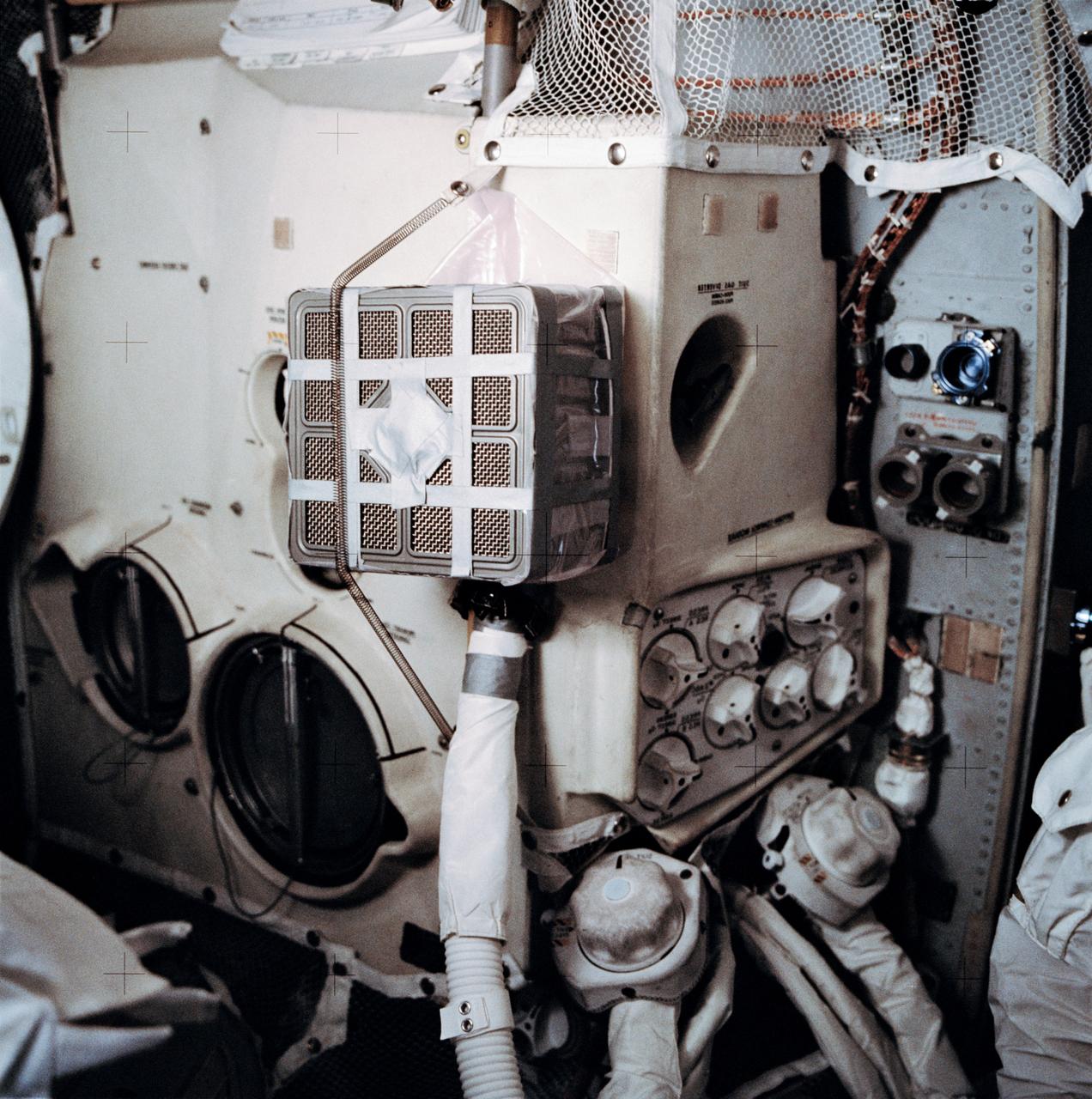 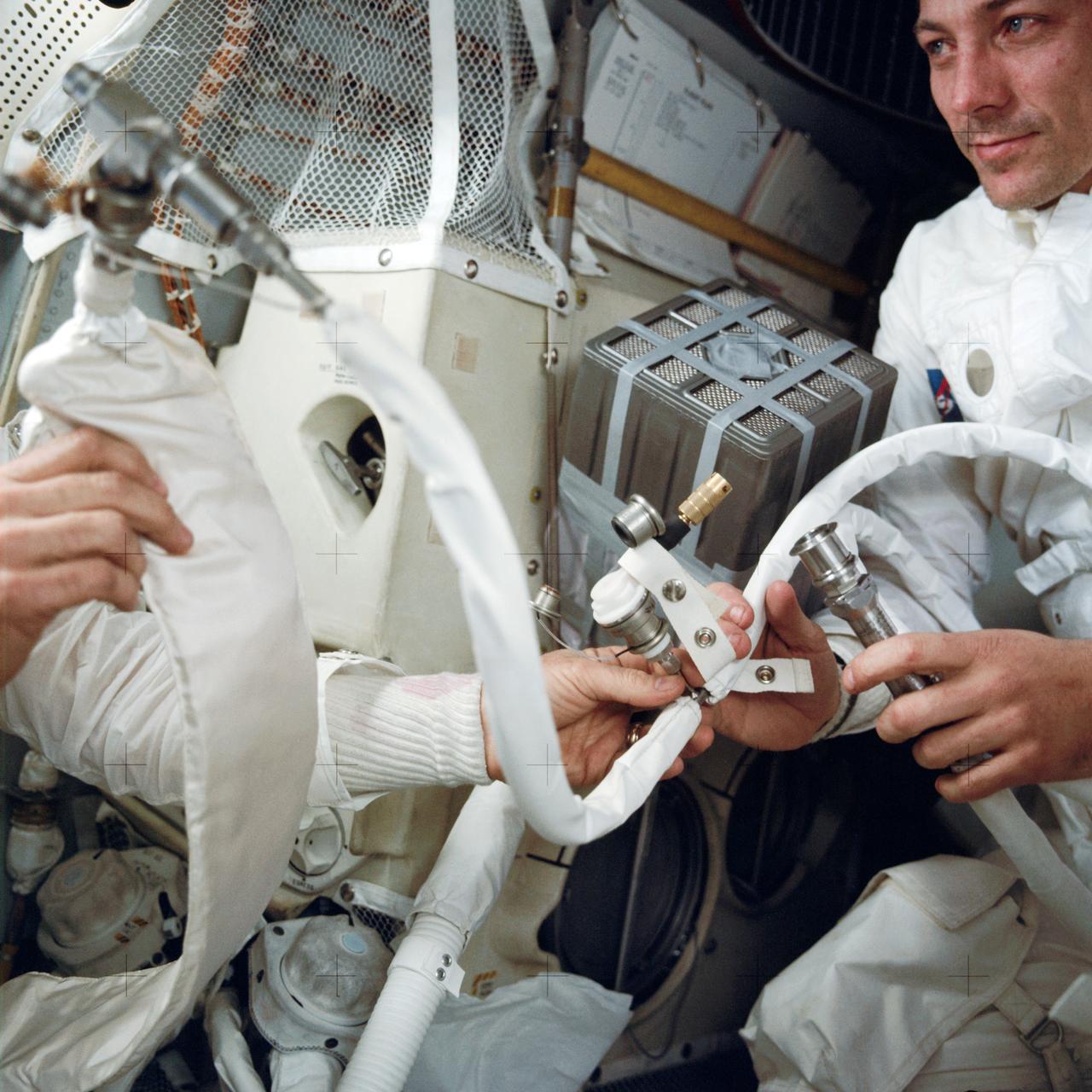 NAVIGATING IN A DEBRIS FIELD

The LM descent engine normally controlled the landing on the Moon would be used to steer the crippled spacecraft back toward Earth. Engineers and mission planners computed how, when, and in what attitude to use the LM descent engine to propel the crew on the quickest return to Earth. The spacecraft had to be aligned correctly at the time of the burn or the crew may miss Earth. Normally the alignment procedure used a sextant to find a star on which to base the navigation. On Apollo 13 it was impossible to sight stars due to the debris field from the explosion causing visual interference. Mission control developed a procedure to use the Sun for alignment, and Commander Jim Lovell completed the improvised burn.

The trip back to Earth in the damaged spacecraft was difficult. In addition to the lack of water and rest, the temperature dropped to 38 degrees Fahrenheit inside the spacecraft when the electrical systems were turned off.

After its long cold sleep, the CM had to be powered up for reentry and splashdown. Flight controllers wrote the new procedures in three days, instead of the usual three months. The CM was cold and clammy at the start of the power-up. All the surfaces were covered with condensation. Mission control worried the moisture would cause problems during power-up, but the extensive electrical insulation improvements made after the Apollo 1 fire prevented any issues. The crew does recall, “as we decelerated in the atmosphere, it rained inside the CM."

Ionization of the air around the CM during reentry typically caused a short blackout in communication with Mission Control. When controllers didn’t hear from Odyssey at the expected time, they feared the CM's heat shield had failed.

Finally, Odyssey regained radio contact after a delay due to Apollo 13's shallow reentry path, which lengthened the blackout. Soon after, Apollo 13 splashed down safely in the South Pacific Ocean.

Although exhausted, the crew was in good condition except for Fred Haise, Lunar Module Pilot, who was suffering from a serious urinary tract infection due to dehydration. 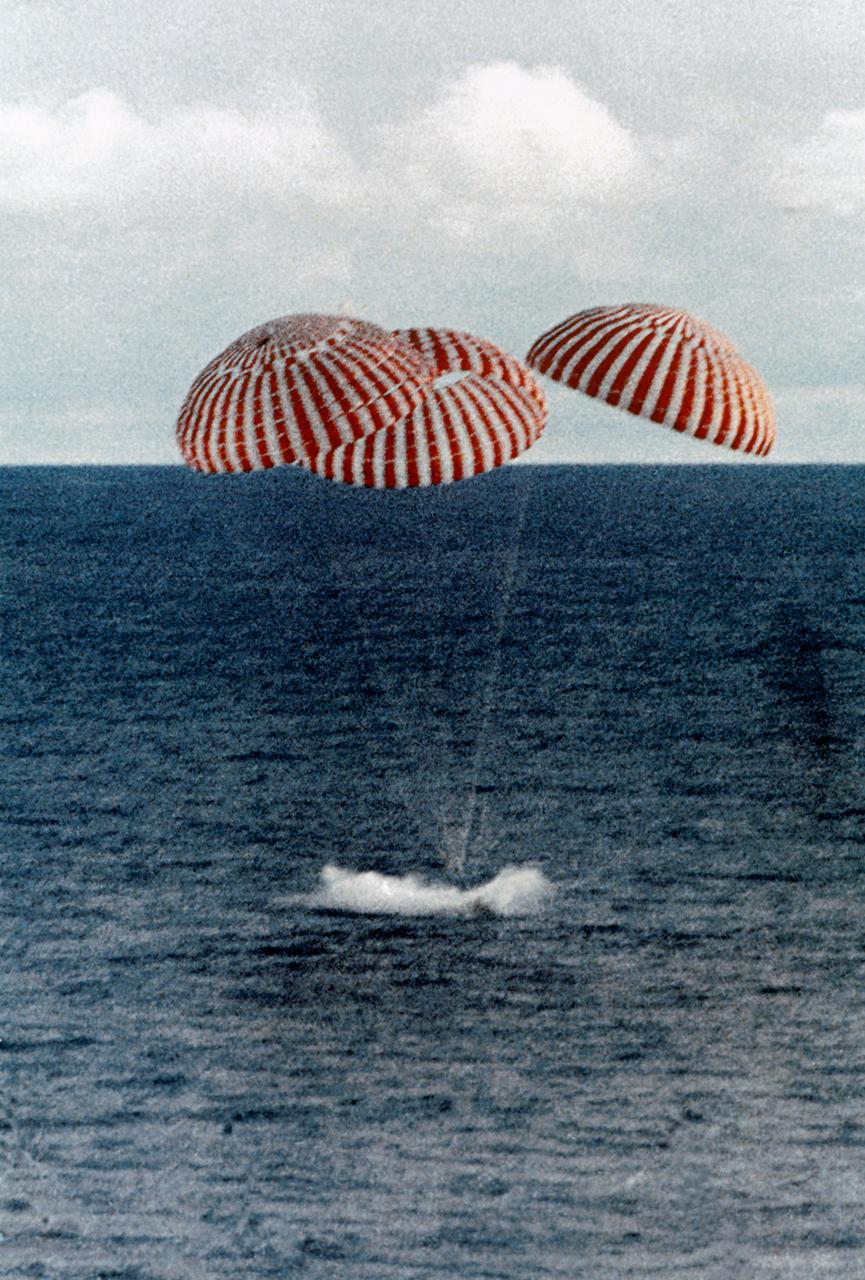 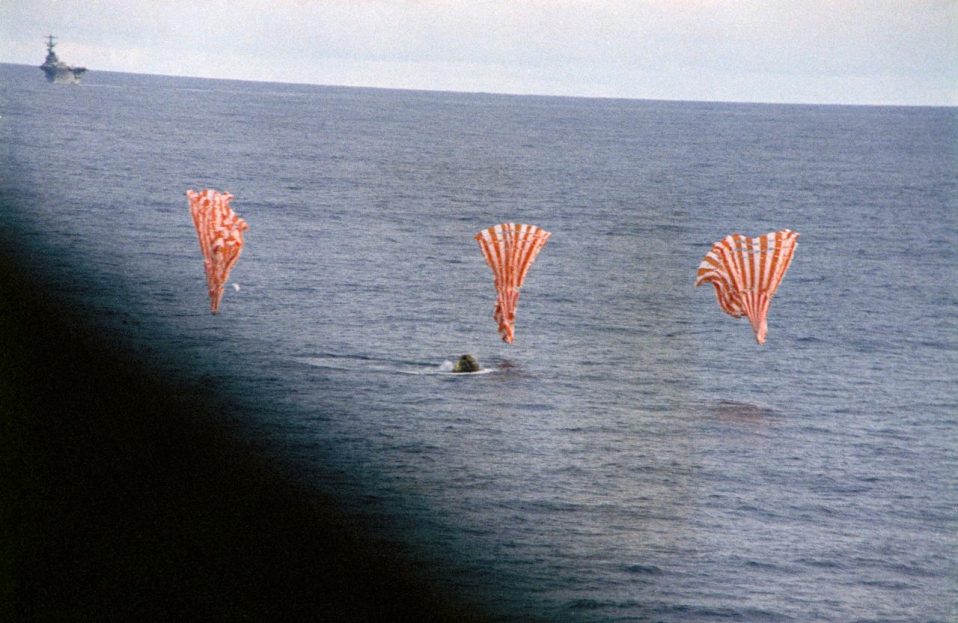 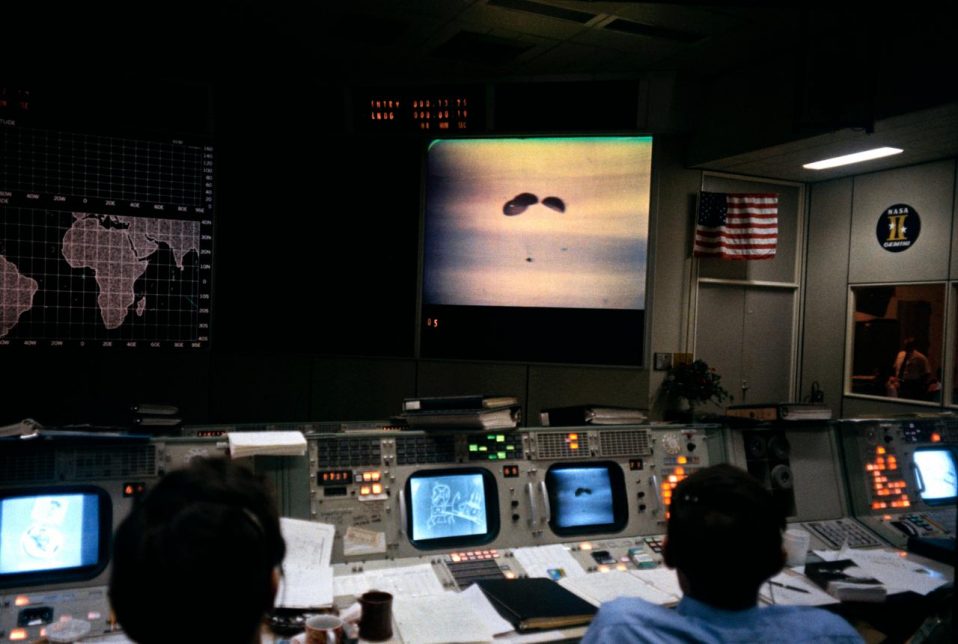 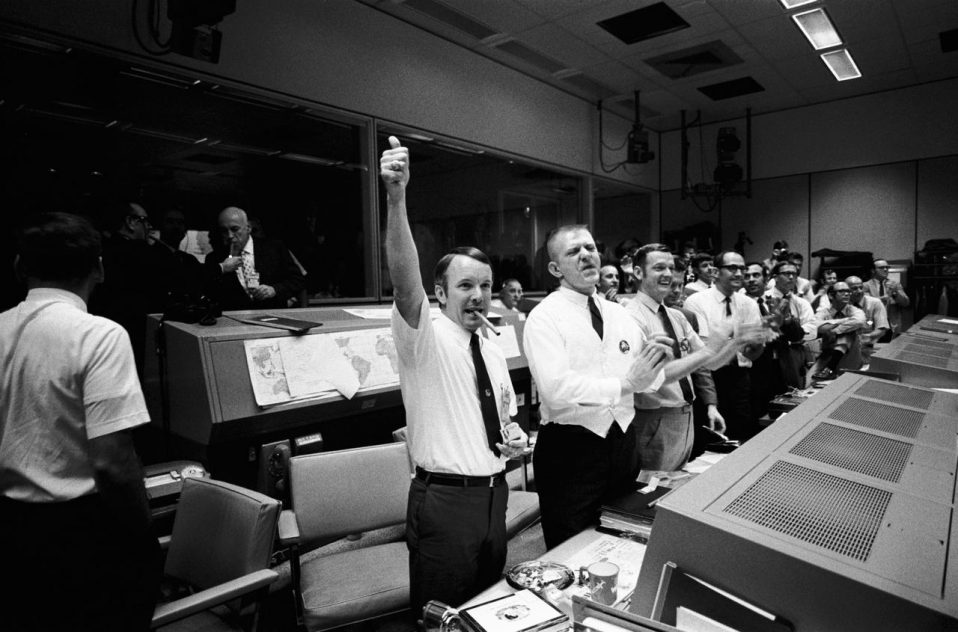 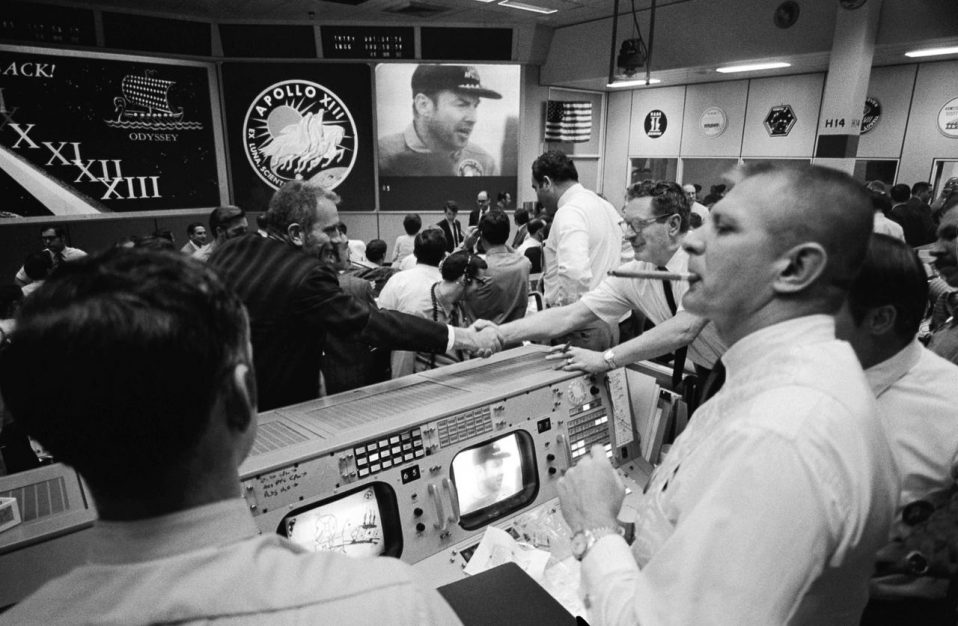 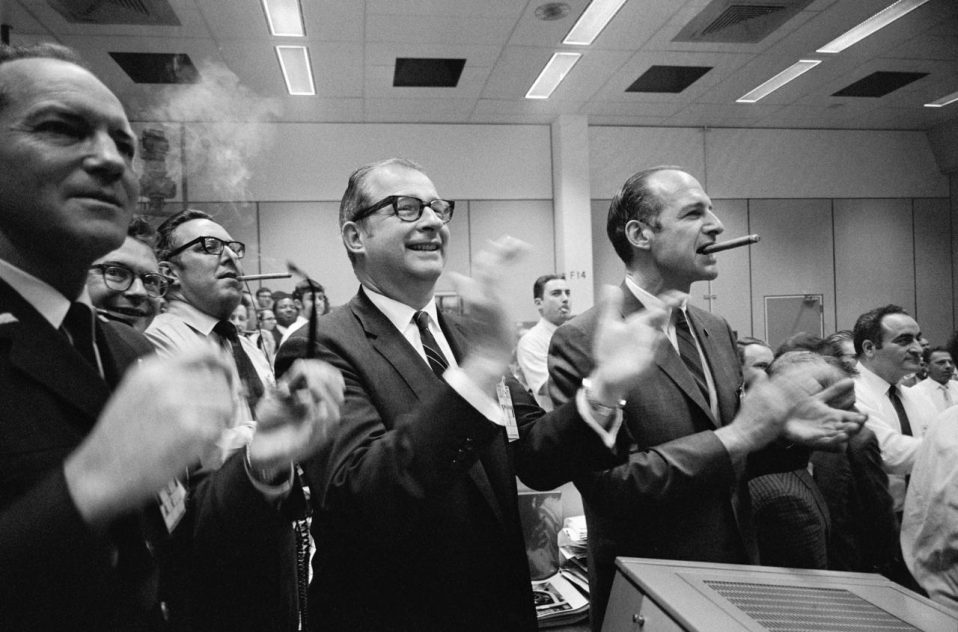 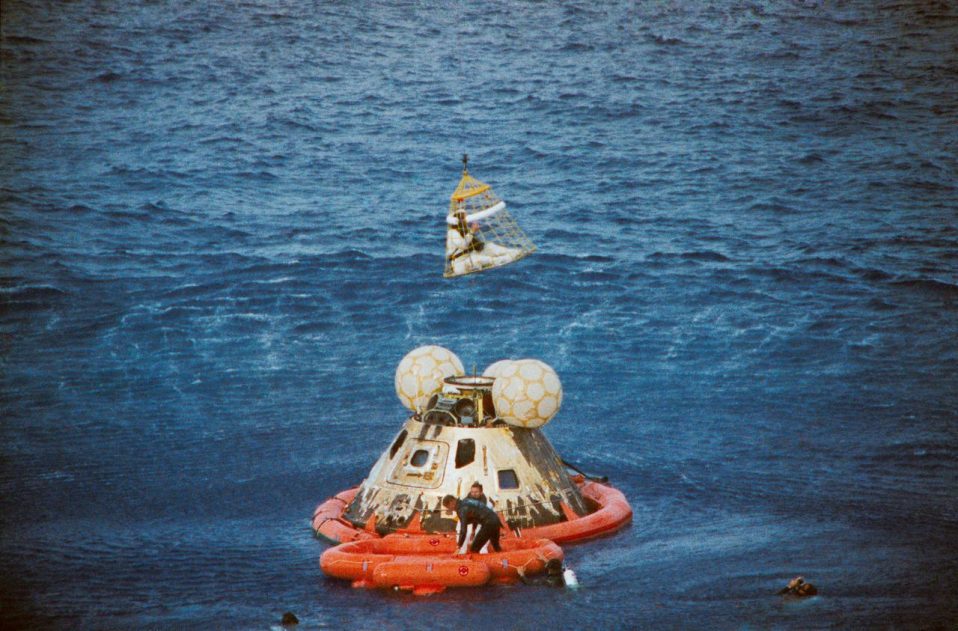 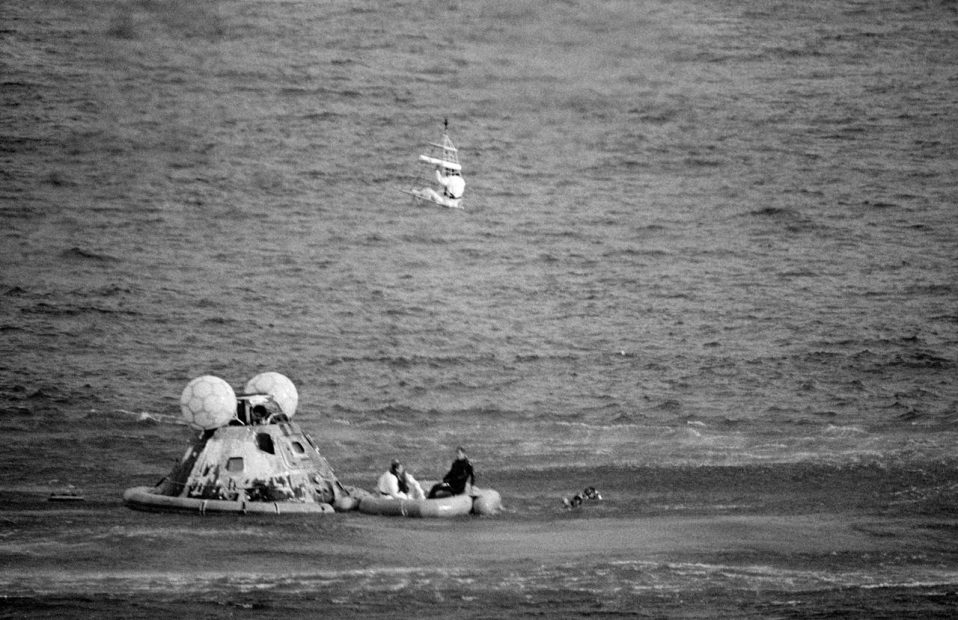 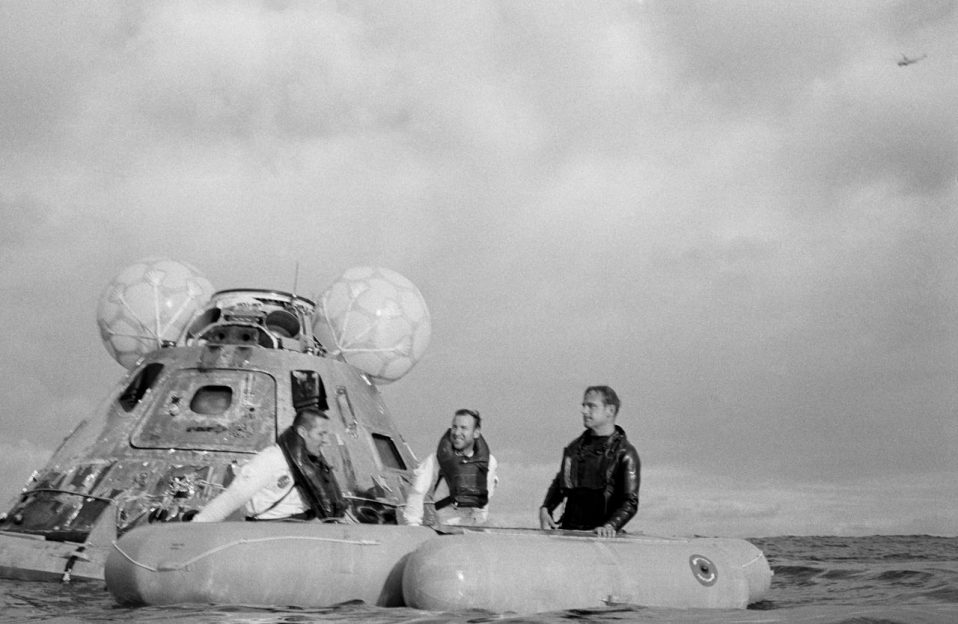 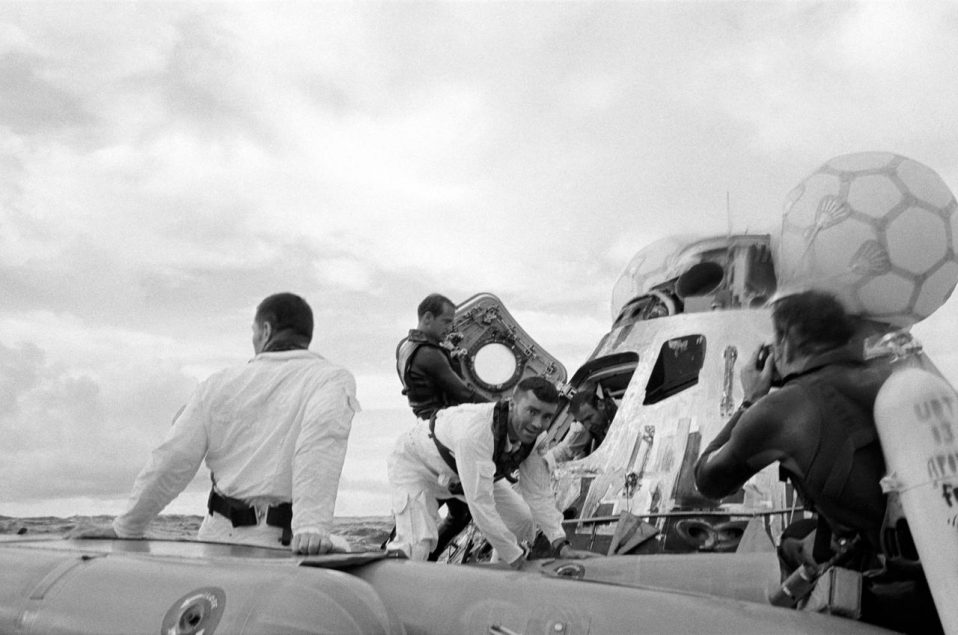 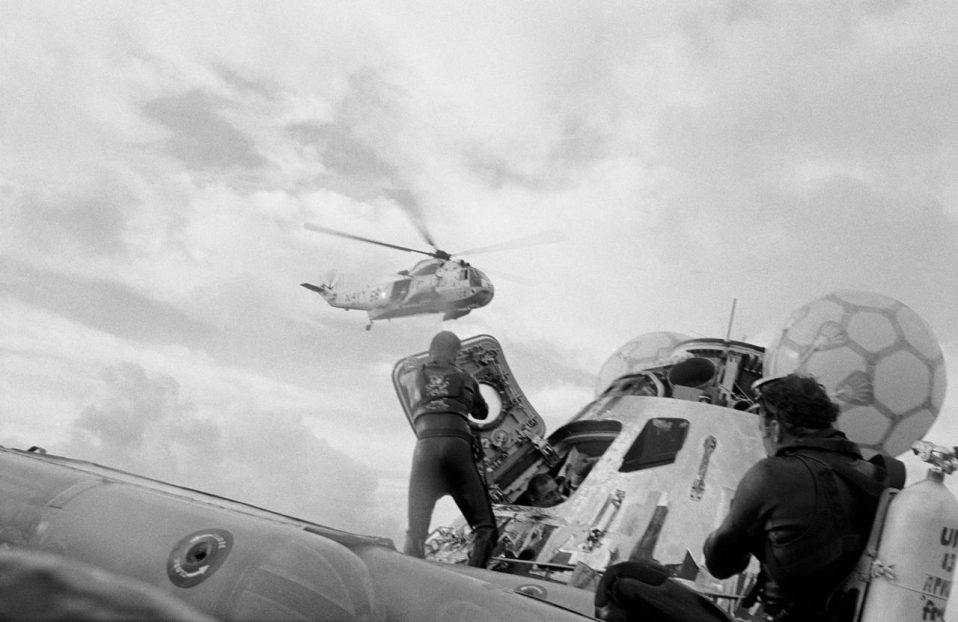 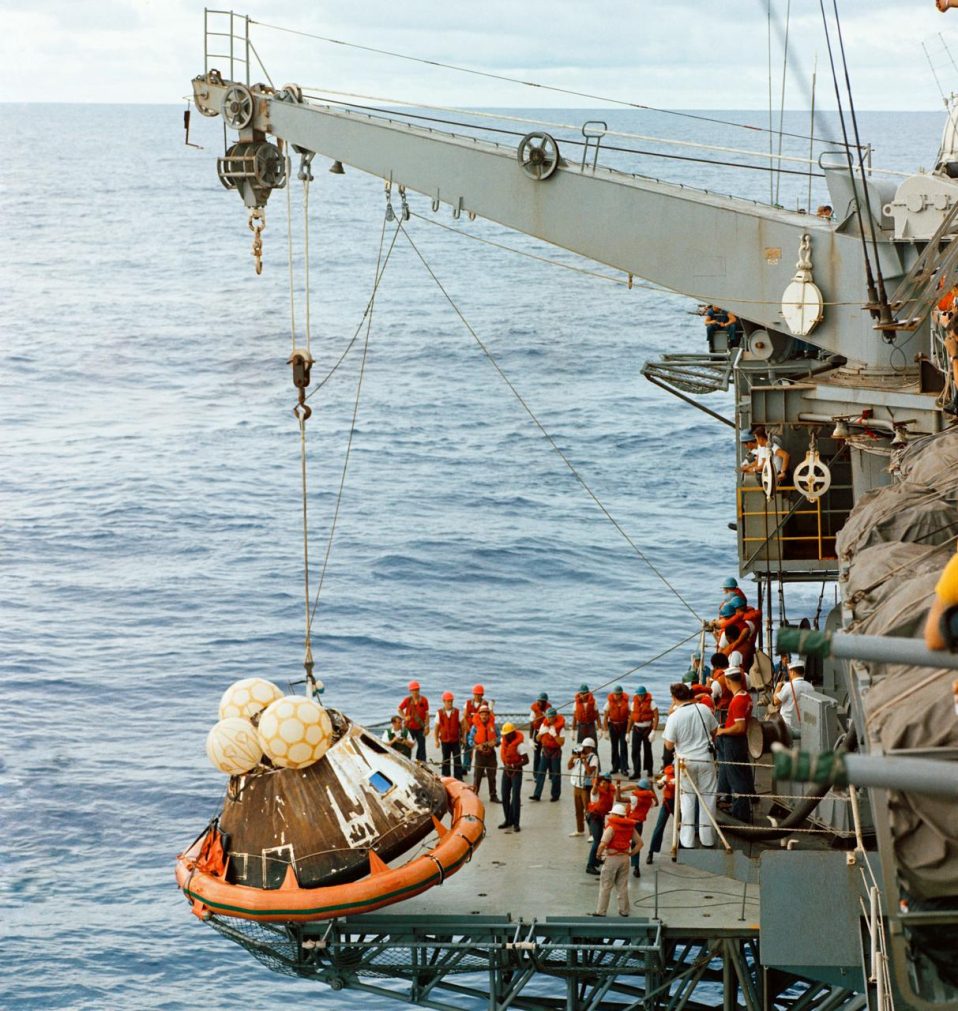 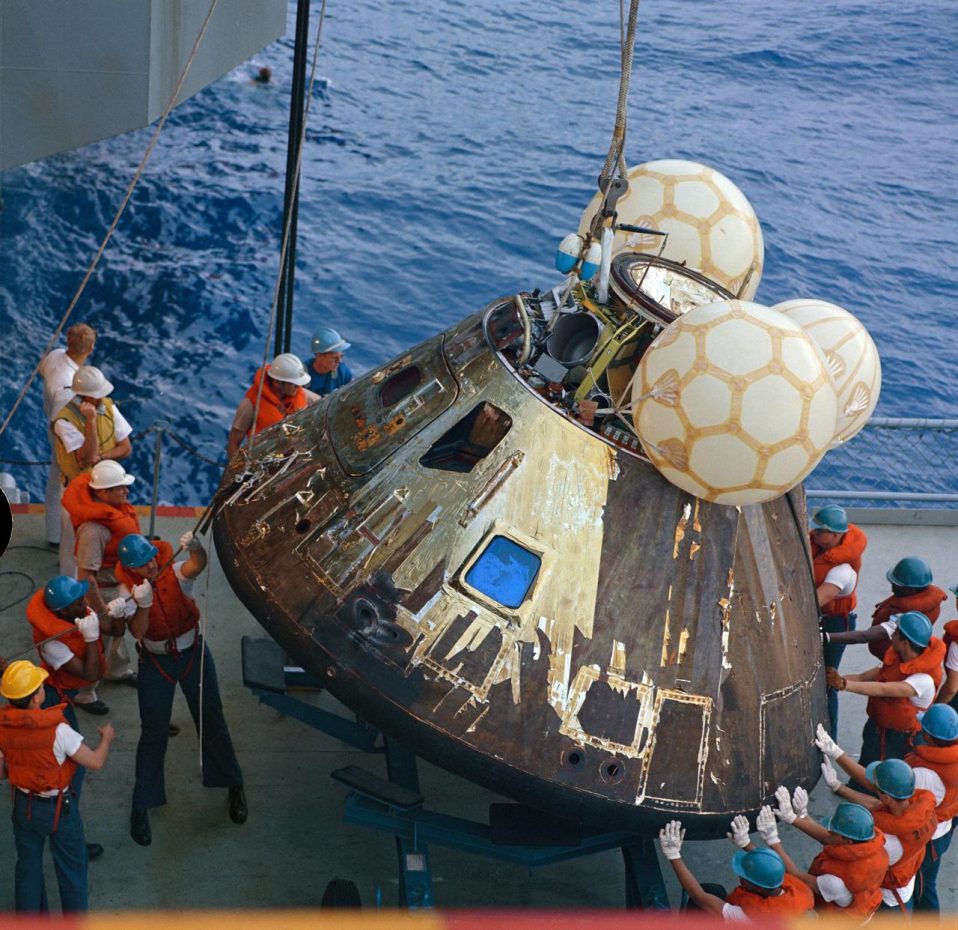 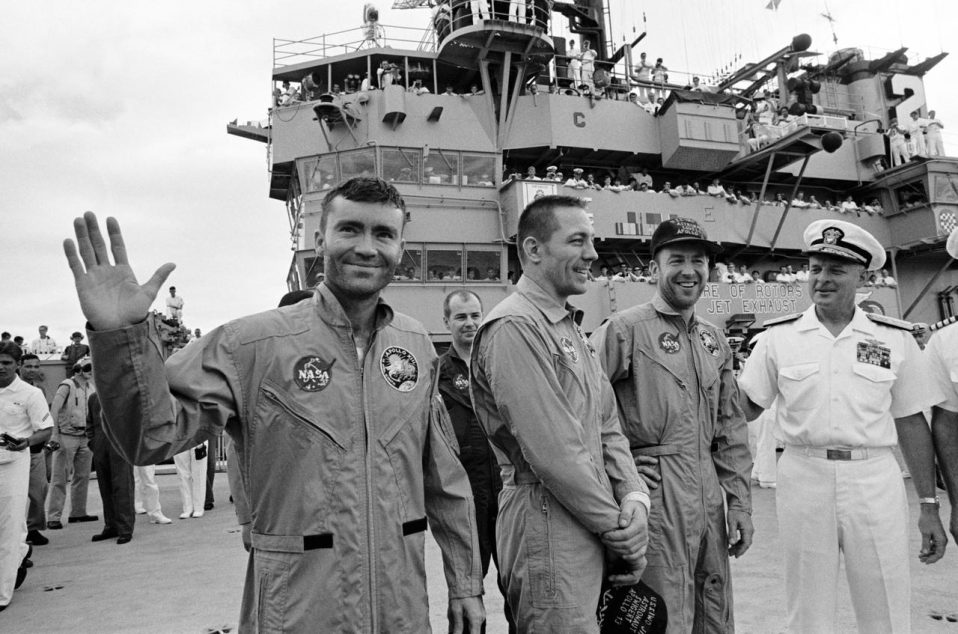 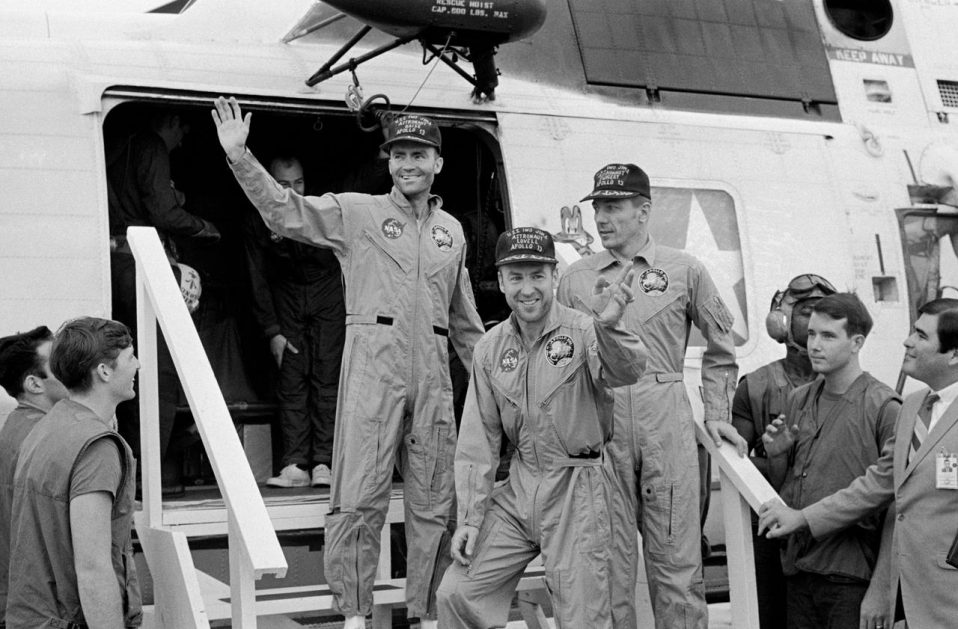 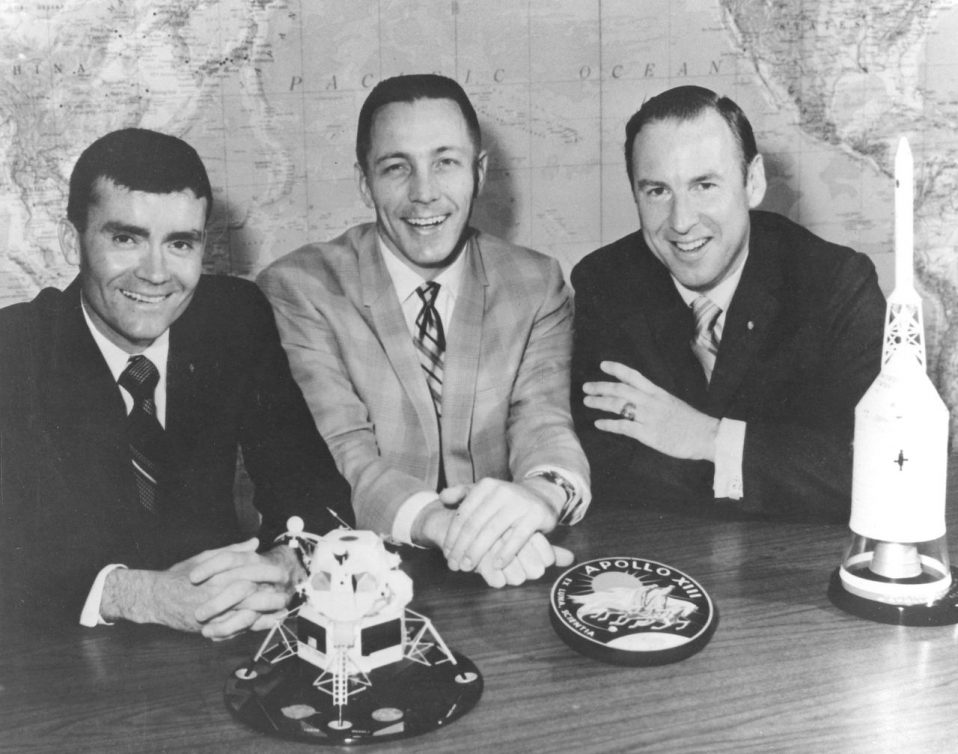 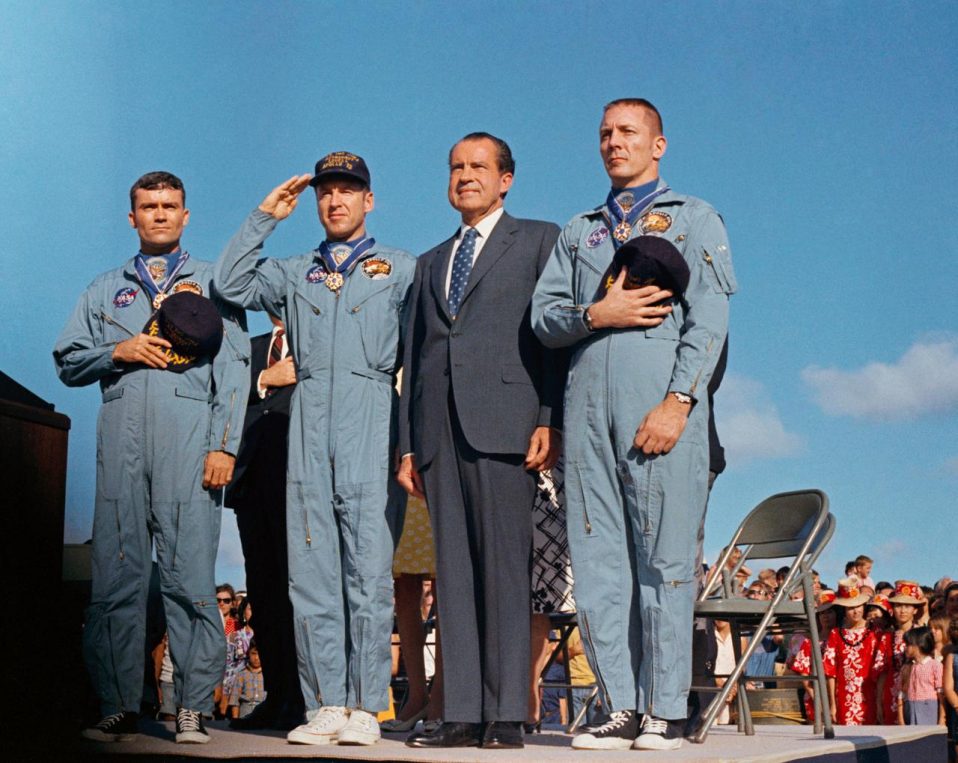 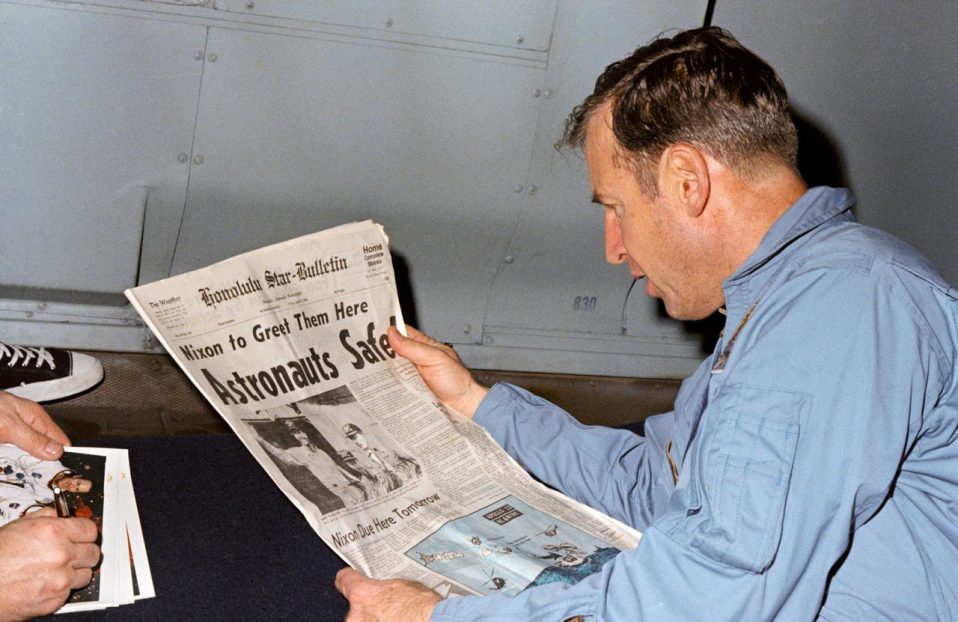 [Apollo 13] was a failure in its initial mission; however, it was a tremendous success in the ability of people to get together, like the mission control team working with what they had and working with the flight crew to turn what was almost a certain catastrophe into a successful recovery. 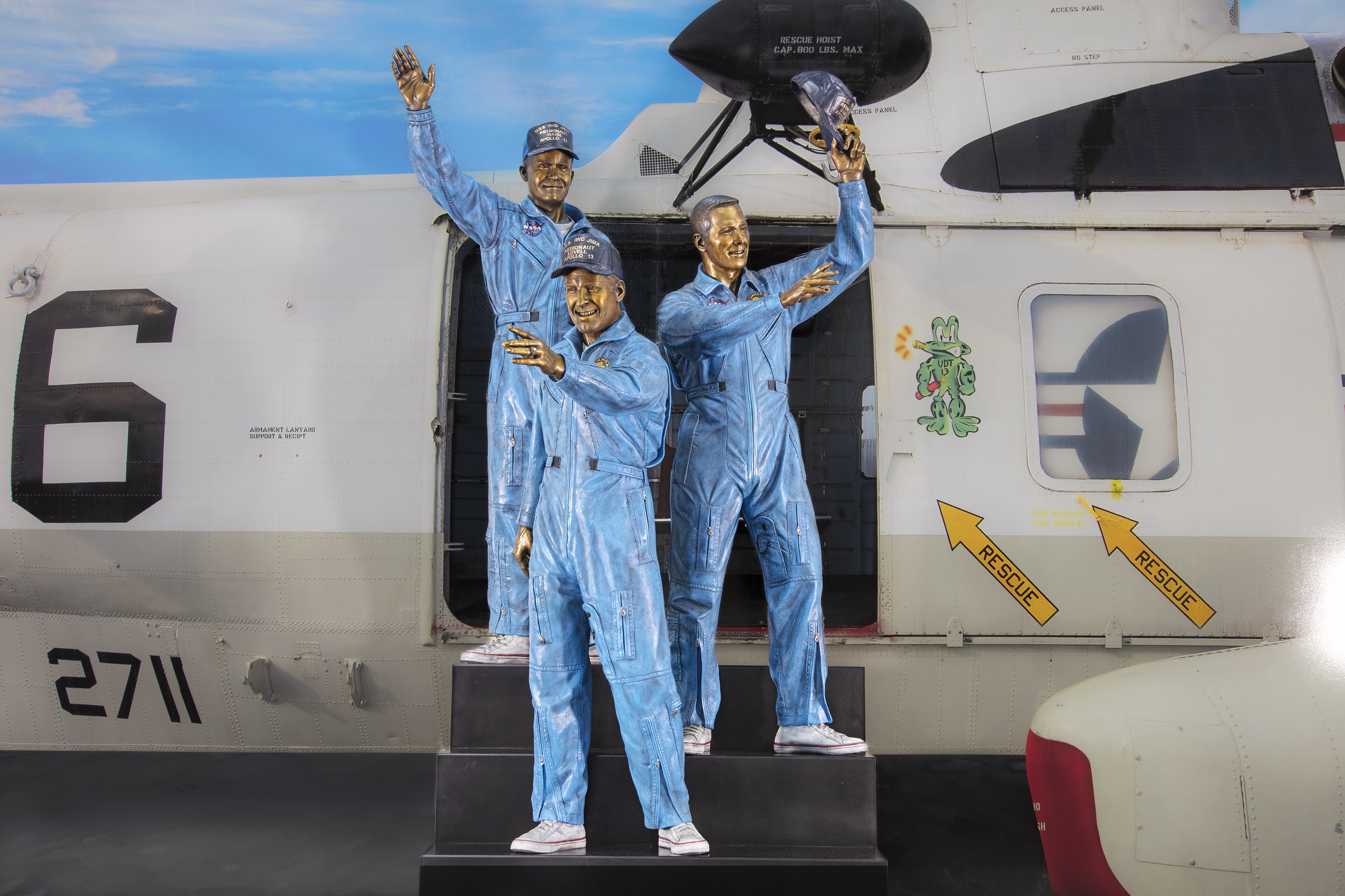 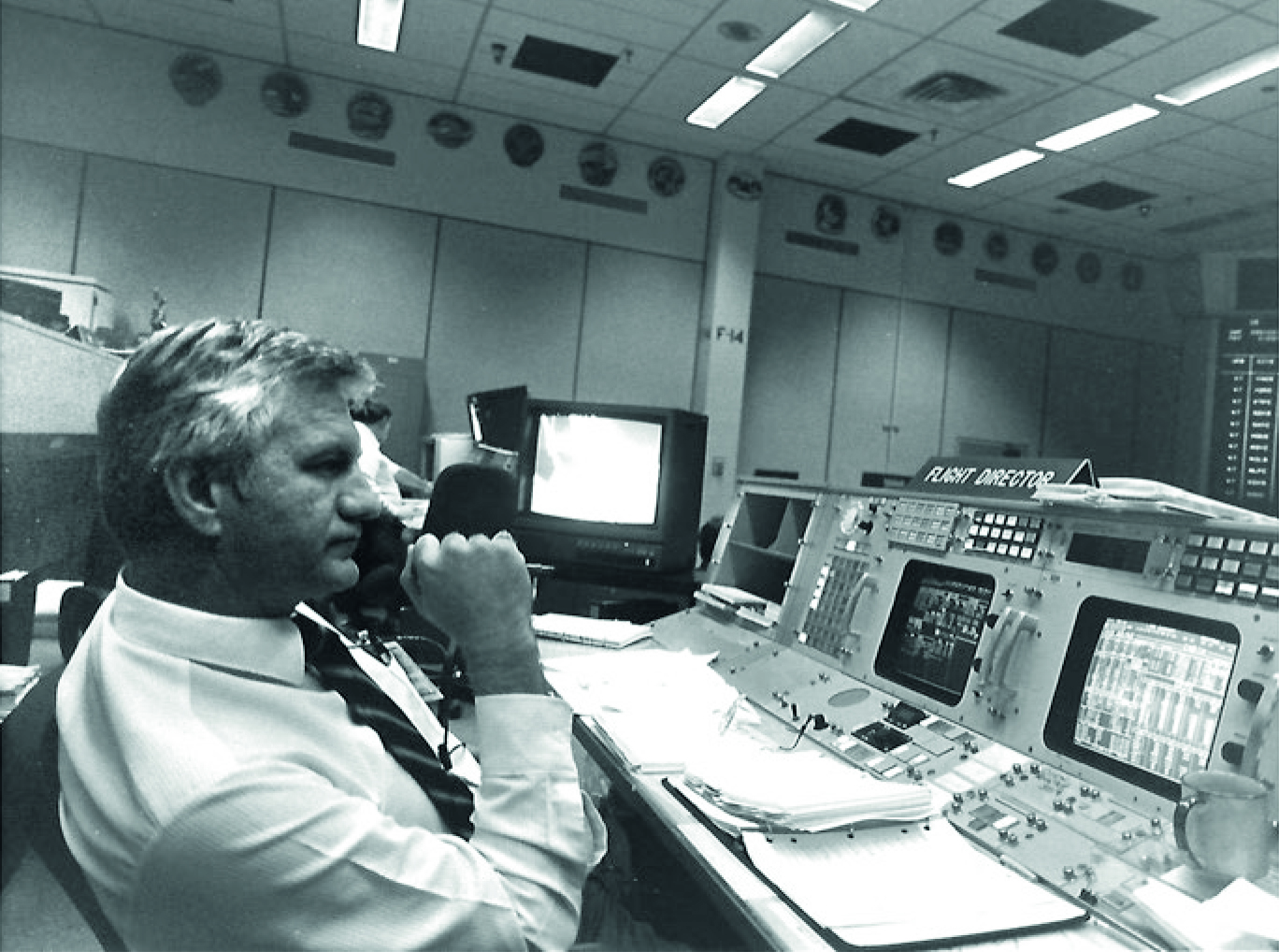 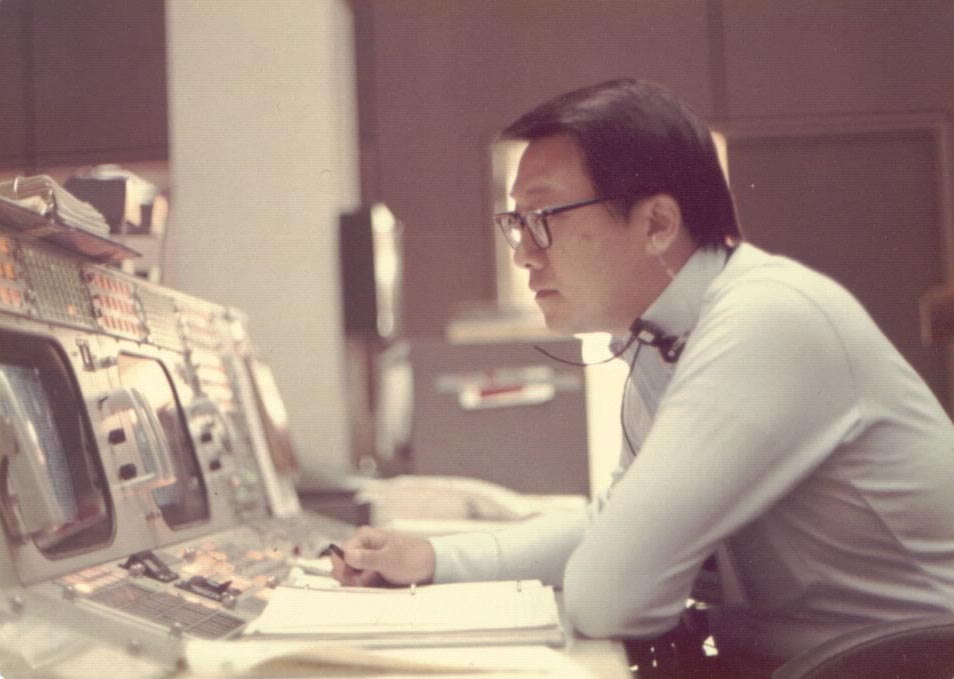